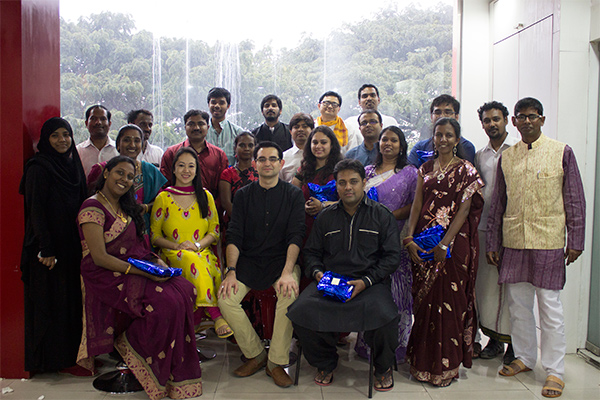 The festival of Lights was upon us. Diwali; it is a beautiful festival that commemorates togetherness and happy times with family and friends. It signifies hope, warmth and brighter times ahead. And it is with all of these emotions that each of us at Maximizer came together to celebrate this joyous festival with pomp, splendor and grandeur. The day dawned on us bright and sunny and there was a warm camaraderie in the air as everyone greeted each other donning their traditional best. We had decided to go all out and make the day as ethnic a possible in our traditional outfits and full zest for the activities that had been planned for us!

My day began with going to work in a saree (which gave me the skeevies at first!) but I somehow managed it with élan till the end! The moment I got in, I saw that our reception desk was adorned in flowers already and Rangoli preparations were in their momentum. The next thing was that all the ladies in pretty sarees, complimenting each other and beginning the day in high spirits. Then came the men; it was amazing to see the guys in Indian attire with their kurta-pajamas (some even in dhotis!) complete with the kolhapuri chappals as well J So all in all, the festive spirit seemed visibly present. Now, our celebration was slated to be post lunch at the terrace as intimated to us by Vandana (our super efficient and super charged HR) and so we were all just waiting for that. Work was not high on anybody’s agenda and pictures and selfies ruled the day! 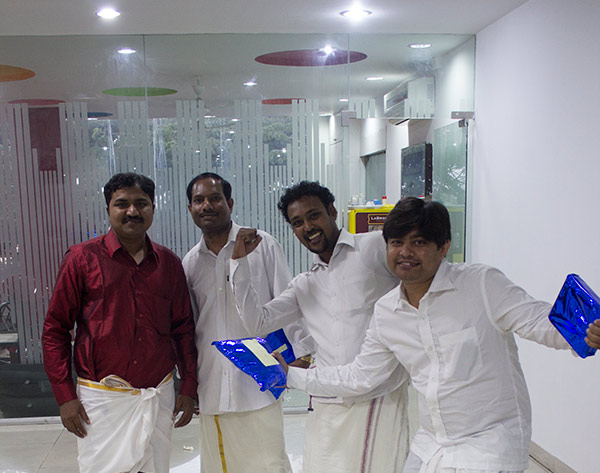 Afternoon finally launched on us and we made our way to the terrace to begin our day’s activities. This Diwali was also special for we had one special member with us; Sameer and Chandni’s little dollop of a daughter who is only a few months old, absolutely precocious and who would also be joining our celebrations! Honestly, seeing her has always been a bit of a highlight for me! Coming back to our Diwali celebrations though, it seems Vandana had set pretty daunting tasks for us. We were all paired up in groups and with this the 1st activity began. It was an individual event with one member from each team participating. I had Sangeeta, Latha and Sherin on my team and it was Sherin who volunteered for this one. It was actually a funny one since the task involved rubbing some Vaseline onto the participants’ noses and using them their nose to pick up cotton balls from one table and place them on a tray across the other side of the terrace as fast and as many as possible. Honestly I’m not even sure of the count because it was some tough game there and everyone was in splits seeing the participant’s race across the terrace! This was followed by the next event that involved blowing a tennis ball from the top of one water filled glass onto another leaving some space between them. This was a challenge, for it involved immense amounts of huffing, puffing, blowing and even splashing of water for some teams! In between pictures were being clicked and Kiara was giggling softly at balloons that were lying by her side! The 3rd task was again hilarious; it involved eating a biscuit from your forehead down to your mouth without using hands! Wondering what a crazy bunch of people up to crazy tasks! Well, take some time out to figure this one out 🙂 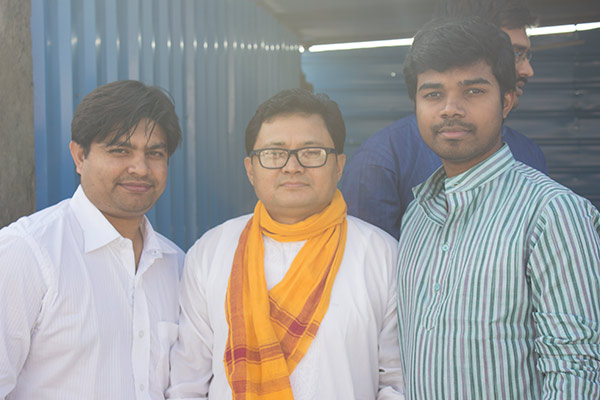 By this time, the sky was heavy with clouds and we were going to be drenched any second. So we shifted back downstairs for the remainder of the day’s events. The last event was the one with balloons; where we had to juggle 2-3 balloons and spin them from one end of the room on to the other and pass it on to our team member who was waiting across the other end! Not as simple as it sounds. The balloons kept flying off and there was confusion figuring out which balloon was which team’s. All in all, this was pretty tiring and I was totally ready to just sit down and get some rest (Yes, I was the participant for this one!) With this event we concluded the celebrations and the rest of the evening was spent distributing Diwali gifts and sweets to all of us. Sameer gave us all our gifts which included our brand new Maximizer T –Shirt which was white in color and super cool! This was followed by more rounds of the shutter with pictures everywhere. And when we looked at the time, it was already 6! Time sure does fly by with so much fun around.

Thus, this concluded our Diwali celebrations at work and being my first Diwali at the company I could not have asked for a better way to spend it. It was fun, interesting and full of activities as well as the perfect time for all of us here to bond and reconnect basking in the spirit of joy and togetherness that Diwlai is all about 🙂

Sameer Panjwani, the founder of Maximizer-e-Services Pvt Ltd marked his foray into the World Wide Web by developing his very own website at the young age of 14. While he could not pursue this at the time because of having to focus on his schooling, he got back on the field in 2004 when he started planning his new ventures online.

He has been prolific in single-handedly developing and launching ChoiceofHomes.com , a U.S. targeted real estate portal, in January, 2005. Although this site served as his launching pad, he always wanted to return to the domain of online marketing where his real interest and passion lay and it was from this point onwards that he began to build his expertise and grow on his experiences in online marketing.

This subsequently led to the formation of an online marketing related portal DirectoryMaximizer.com in September, 2006. This portal offered a subset of the vast array of online marketing services available, but it was the focus on this niche that led to the company’s growth. The website has been a huge success and has been widely appreciated by its base of more than 25,000 active clients all over the world. He then went on to create a multitude of other online marketing related services like SocialMaximizer.com and DirectoryCritic.com that have all been hugely successful.